Find out why brewing without animal products is important and how we reduce or remove gluten.

It’s important to grasp that there is no flavour penalty in brewing vegan or gluten-free. In fact, the reverse is true – the beer is fuller-flavoured.

Why We Believe in Vegan & Gluten-Free Brewing 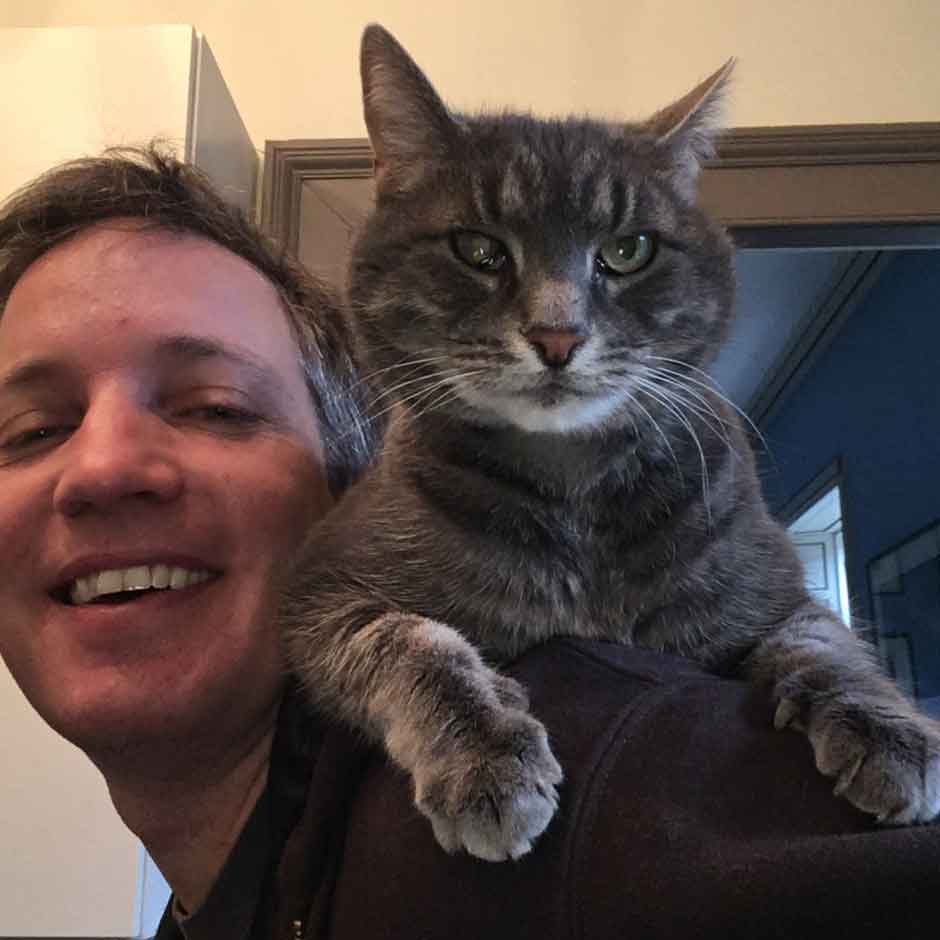 It's about doing the right thing and making better-tasting beer.

From homebrew beginnings, through to learning the ropes at a microbrewery in the US, the idea of compromising the goodness of the beer we made by adding animal-derived process aids always struck us as weird. But that is still what most of the cask beer industry does, and many of the ‘craft’ breweries who are bulking their beers out with lactose sugars. We feel that these animal product additions are simply unecessary, lazy and almost always diminish the final product. From day one, we found alternative ways to clarify our beer and render mouthfeel. Chief among those was the careful selection of our own house yeast – a very traditional English ale strain, that is flocculent and clears from beer (when we want it to) without the need for finings or process aids like isinglass. 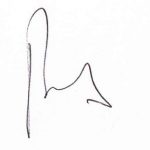 We do not use isinglass finings in our cask beers. Mostly because we think that the addition of icky gloop created from the swim bladder of fish is disgusting, but also because it’s unnecesssary. What is isinglass? Well, the manufacturers describe it thus:

– COMPOSITION An acidified aqueous suspension of collagen derived from the swim bladder of certain fish; and sodium metabisulphite 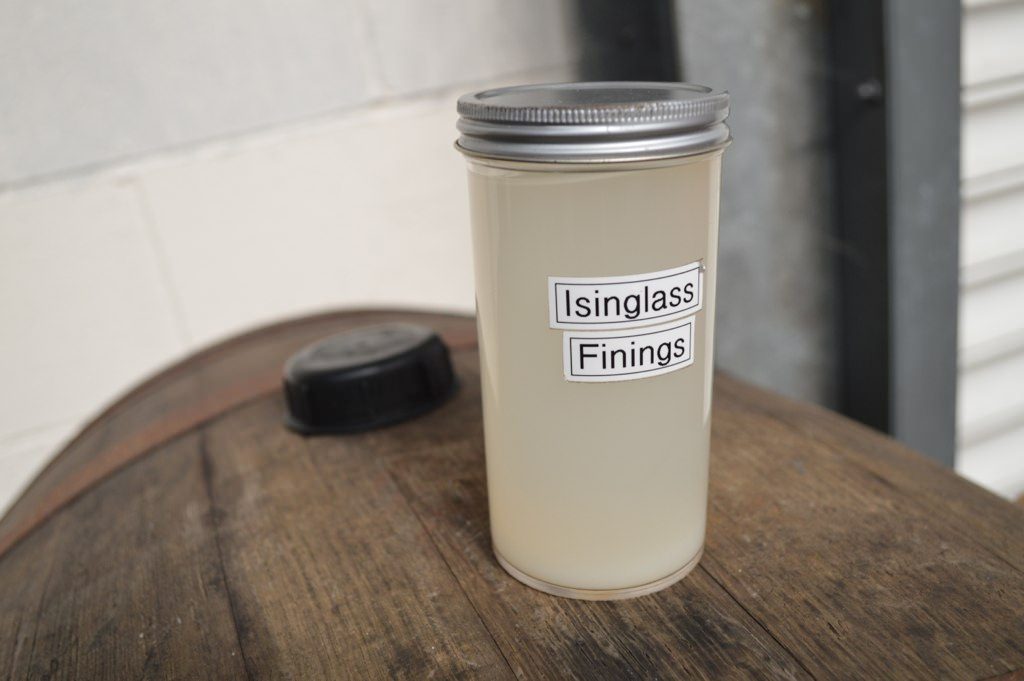 Essentially, it is a process aid that allows brewers to create crystal clear beer more swiftly than would otherwise be possible, thereby cheapening the brew cycle. In the manufacturer’s words: “Very large savings in both cooling energy costs and capital investment in tankage may be made as a result of shorter conditioning time that can be gained by treatment with isinglass”.

Some people talk about ‘fish gut’ additions to beer and isinglass is what they are referring to, but we’ve never seen a brewer actually add a handful of fish guts! Industrially-prepared isinglass looks more like semen.

Other reasons not to use it…

1. It artificially hastens beer clarification, meaning that the brewer does not need to concentrate so much on recipe formulation, yeast selection/health and fermentation profile etc in order to guarantee clear beer. In removing haze particles, there is evidence to suggest that isinglass additions also remove flavour-active proteins and so strip flavour. Brewers therefore use it to ensure that the beer LOOKS good, often at the expense of TASTING good.

2. The addition of up to 1.5L of isinglass to a cask fiddles the publican (and therefore the drinker) out of 1.5L of beer. Isinglass is cheaper than beer. The publican has to raise the price of a pint to cover the lost quantity of beer in the cask – i.e. for two identically-priced casks of beer, the non-isinglassed cask will yield more beer. In addition, breweries pay duty based on the amount of “beer” in the cask – so at Brass Castle we pay duty to the public purse the full volume of fluid available in the cask, while other breweries using isinglass pocket that difference.

3. Isinglass goes off. Also, the “acidified aqueous suspension of collagen derived from the swim bladder of certain fish; and sodium metabisulphite” addition in a sealed cask of beer raises sulphite levels, reduces yeast activity, foreshortens secondary fermentation and can lead to a beer staling through yeast autolysis. 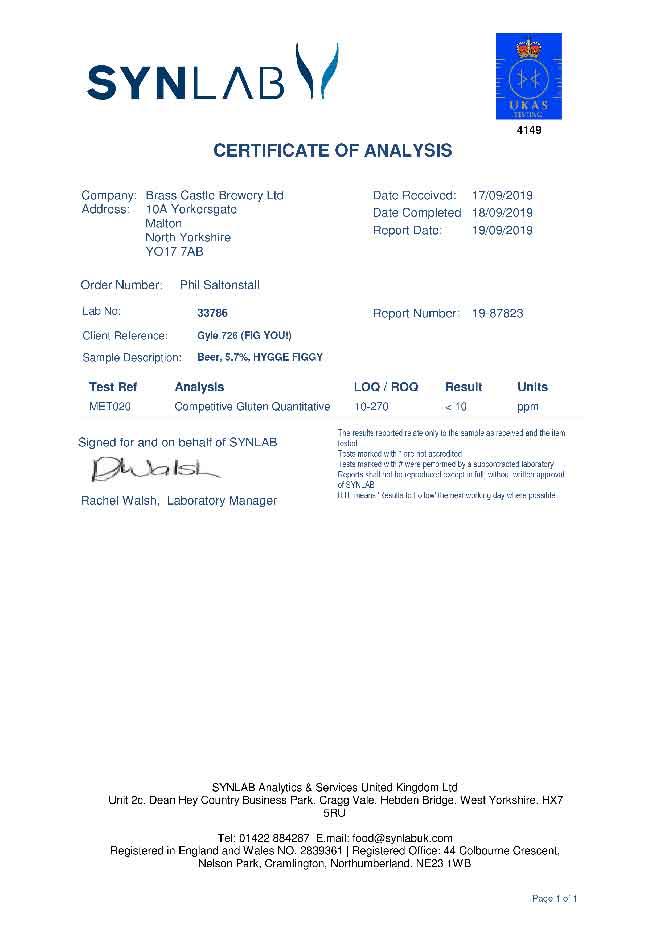 We brew gluten-free beers by adding a tiny amount of a vegan-friendly enzyme to the beer during fermentation (actually a Murphy & Son product called ‘Brewers Clarex’ ). Marvellously, it’s an enzyme isolated from a self-cloned strain of the mould Aspergillus niger. Some breweries use it to reduce protein or ‘chill’ haze; but a lovely side-effect is a reduction in dissolved gluten. Our certified gluten-free can and keg beers are individually batch tested through a UK food laboratory, using the competitive ELISA testing protocol. We have also doubled-up on the ELISA tests by using government facilities to check each of our core beer brands for gluten content through mass spectrometry testing – the most widely accepted and highest quality test protocol there is for hydrolised gluten.

Since December 2017 we have produced all our beers to gluten-free recipes. While beer (particularly cask beer) remains artificially under-priced, it is prohibitively expensive for us to test certify each individual ‘gyle’ or batch of keg and cask beer. Therefore, although all beers are brewed to a gluten-free recipe and there can be a high degree of certainty than any Brass Castle Beer will contain <10ppm gluten (well below the international ‘gluten-free’ standard); only our canned beers and cask/keg Hoptical Illusion are individually batch-certified gluten-free.

Join our Crowler Club to scoop discounts on draught beer and online purchases; plus a VIP invite to our annual Crowler Club Party, where the beer is free.
JOIN THE CLUB

Or, Visit our Taphouse 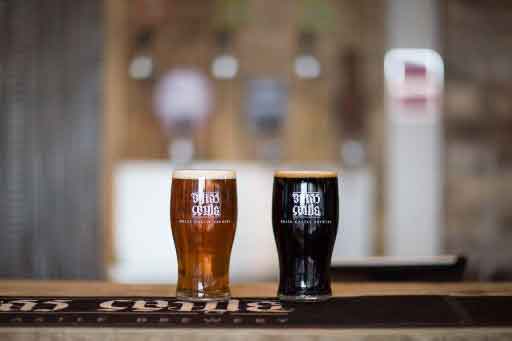 The brewery Taphouse is open next door at 10 Yorkersgate.  Serving at least 8 beers, Brass Castle brewed kombucha, cider, Roost barista coffee, tea, wine, prosecco, gin and soft drinks.  Plus a cracking selection of Belgian beers and Brass Castle cans to take away.  Malton is Yorkshire’s Food Capital, so grab your eats locally and feel free to bring them in with you.  Look out for our quiz nights, vinyl sessions and ‘Storm the Castle’ tap takeovers.

Beer is a noble drink. Brass Castle is a group of friends, working hard to return that nobility and make great beer.